When we sleep at night, we typically go through several sleep cycles. And each one of these cycles consists of 4 different stages of sleep.

The 4 Stages of Sleep 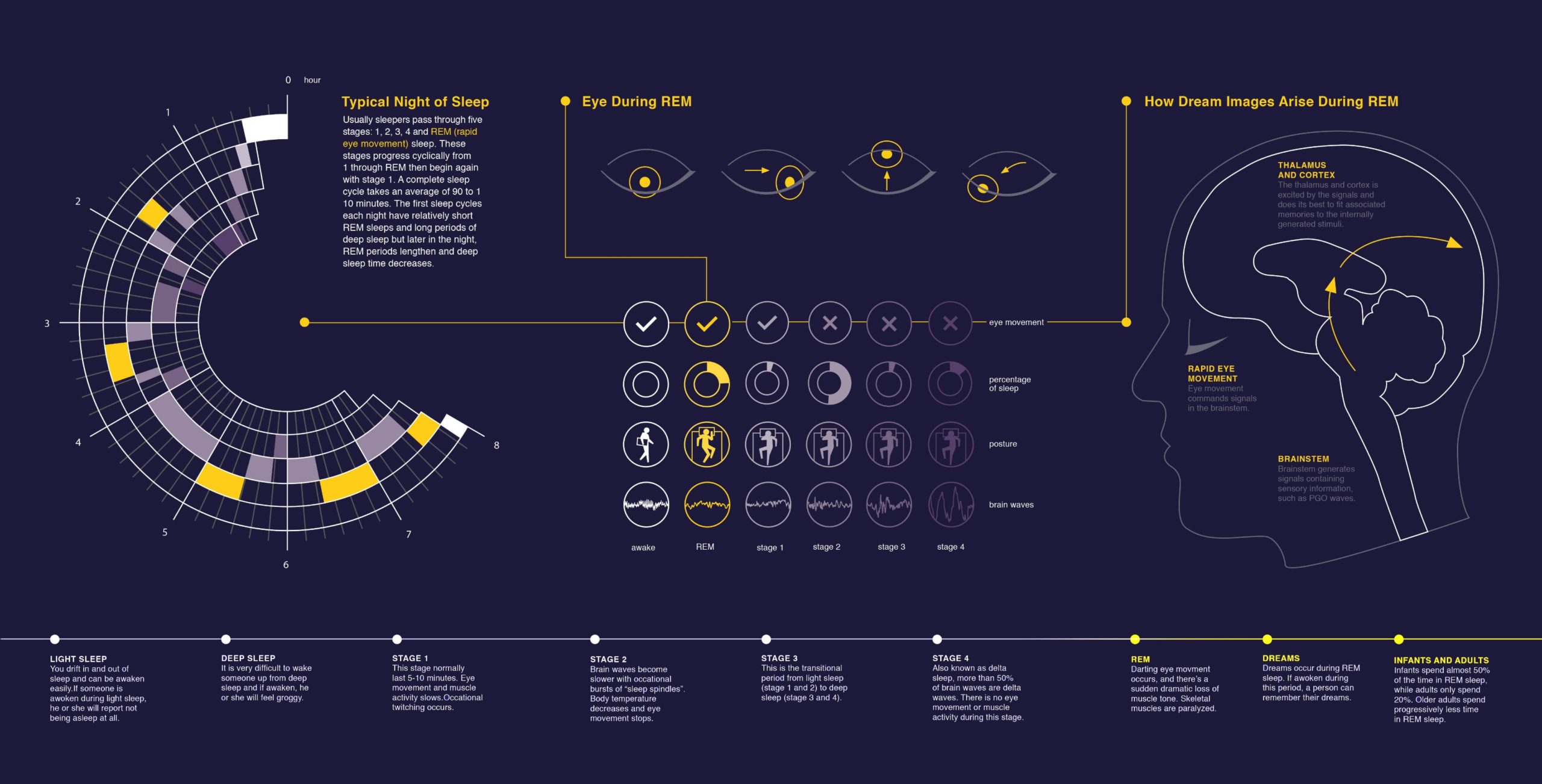 During sleep, we usually pass through five phases of sleep: stages 1, 2, 3, 4, and REM (rapid eye movement) sleep. These stages progress in a cycle from stage 1 to REM sleep, then the cycle starts over again with stage 1. We spend almost 50 percent of our total sleep time in stage 2 sleep, about 20 percent in REM sleep, and the remaining 30 percent in the other stages. Infants, by contrast, spend about half of their sleep time in REM sleep.

During stage 1, which is light sleep, we drift in and out of sleep and can be awakened easily. Our eyes move very slowly and muscle activity slows. People awakened from stage 1 sleep often remember fragmented visual images. Many also experience sudden muscle contractions called hypnic myoclonia, often preceded by a sensation of starting to fall. These sudden movements are similar to the “jump” we make when startled.
When we enter stage 2 sleep, our eye movements stop and our brain waves (fluctuations of electrical activity that can be measured by electrodes) become slower, with occasional bursts of rapid waves called sleep spindles.

In stage 3, extremely slow brain waves called delta waves begin to appear, interspersed with smaller, faster waves. This is the stage where one enters Deep Sleep as it is very difficult to wake someone at this stage. There is no eye movement or muscle activity. People awakened during deep sleep do not adjust immediately and often feel groggy and disoriented for several minutes after they wake up. Some children experience bedwetting, night terrors, or sleepwalking during deep sleep.

This is the final stage of any standard sleep cycle. The first Rapid Eye Movement (REM) sleep lasts around 10 minutes and usually happens after having been asleep at least 90 minutes.

Usually, REM sleep happens 90 minutes after you fall asleep. The first period of REM typically lasts 10 minutes. Each of your later REM stages gets longer, and the final one may last up to an hour. Your heart rate and breathing quickens. You can have intense dreams during REM sleep, since your brain is more active.

Breathing becomes more rapid and irregular during REM sleep than during non-REM sleep, and the heart rate and blood pressure also increase to near waking levels. Core temperature is not well regulated during this time and tends towards the ambient temperature. Although the muscles become more relaxed during non-REM sleep, they become completely paralyzed and unresponsive during REM sleep.

Babies can spend up to 50% of their sleep in the REM stage, compared to only about 20% for adults.